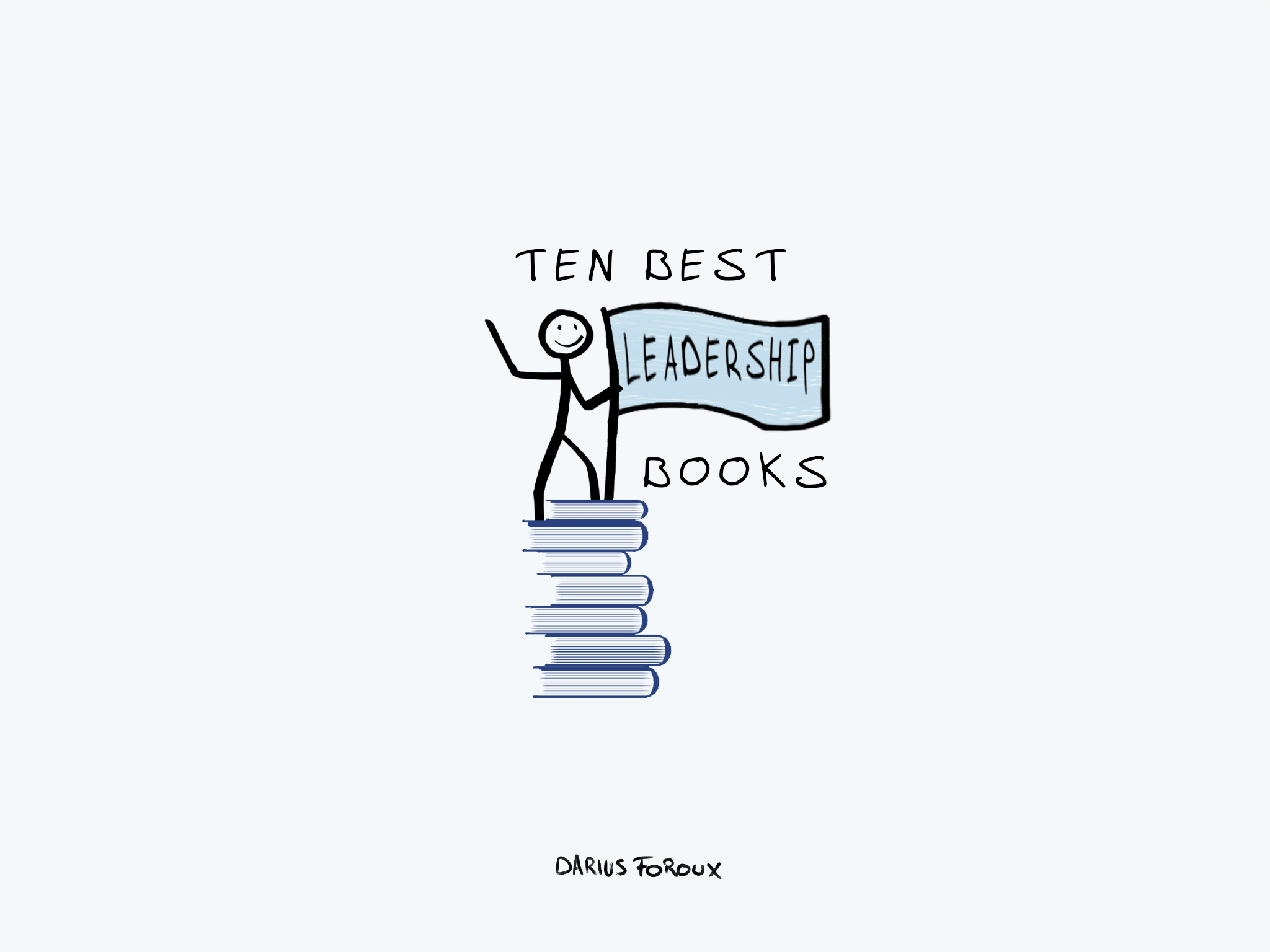 Leadership is something we demonstrate, not something we talk about. That’s why I’m not a fan of “leadership books” that try too hard to explain leadership.

I prefer books that highlight what important leaders actually have done—not just what they said. To me, books that demonstrate leadership through examples are the best kind.

Some of the books you’ll find below don’t even mention leadership at all. Yet, I’ve learned a lot about leadership by reading them.

If you’re looking for inspirational books that make you a better leader, I recommend reading these.

“Just because some people can do something with little or no training, it doesn’t mean that others can’t do it (and sometimes do it even better) with training.”

In this famous book, Stanford University psychologist Carol S. Dweck talks about how we perceive talents and abilities. She says there are two main types of mindsets:

Years after its first printing, Dweck also introduced the growing phenomenon called, “False Growth Mindset” where people think or claim they have a growth mindset but their actions show otherwise.

The best leaders are the ones who have a true growth mindset.

“Time is the friend of the wonderful business, the enemy of the mediocre.”

Warren Buffett, CEO of Berkshire Hathaway, is one of the most well-known and respected investors in the world. Yet, by celebrity standards, he’s very private.

He’s never written a memoir. But he allowed writer Alice Schroeder to explore his life, his work, and his thoughts.

Schroeder’s work on finance impressed Buffett. So he gave the writer complete access to his work philosophy, background, and life.

This is a very dense book. So I would only pick it up if you’re really in the mood for spending a lot of hours reading about a person’s life. But if you do decide to read a biography, this one will not disappoint.

In 7 Habits, Covey talks about attaining one’s “true north.” He says there are 3 stages of maturity (“Maturity Continuum”):

When we’re born, we’re all dependent. We look to our parents/guardians for support. And we only care about ourselves.

As we grow, we start shedding certain dependencies; we move out, live our own lives, and grow our support network. We learn to consider other people’s needs.

As we become more independent and mature, our need for external influence and approval decreases. And our work benefits us as well as others. T

his important book explores how certain individuals achieved interdependence, the highest level of maturity, through their habits. It’s also a book that’s worth re-reading.

“The courage to be vulnerable is not about winning or losing, it’s about the courage to show up when you can’t predict or control the outcome.”

This is a book that’s explicitly about leadership. But it talks about the topic differently than most conventional leadership books.

How do you cultivate braver, more daring leaders? And how do you embed the value of courage in your culture?

These are the questions that Brown attempts to answer in her book, Dare to Lead. And it shows examples, research, and stories that are very relatable. That’s why this book is so effective.

“Good leaders don’t make excuses. Instead, they figure out a way to get it done.”

While the previous book shares relatable stories, this book shares very extreme examples. But the lessons are useful.

In Extreme Ownership, retired officers Willink and Babin talk about the principles and mindset that enable SEAL units to accomplish the most difficult missions in combat.

They also apply these principles to any leadership environment; whether it’s your family, team, or organization.

The mindset of Willink and Babin might seem out of reach and impossible to implement, but if you give it a try, it’s very helpful. We can all use mental toughness.

“It is only after slavery and prison that the sweetest appreciation of freedom can come.”

Malcolm X is known for his work as a human and civil rights activist in the US. He was also the leading face of the Black Muslim Movement for many years.

The Autobiography outlines Malcolm X’s controversial philosophy of life. The point of this book is not to agree or disagree with his beliefs.

What I like most about this book is Malcolm’s energy and conviction. The best leader is someone who truly believes in something. I don’t think you will find another person who believed more in their cause than Malcolm.

“We have two ears and one mouth and we should use them proportionally.”

Cain claims that at least one-third of the people we know are introverts. In Quiet, Cain shows how introverts are often undervalued and overpowered by flamboyant public speakers who are experts at self-promotion.

But introverts succeed too. Cain examines different case studies: from a record-breaking salesman who mastered the power of questions, to a highly sought-after public speaker who recharges in solitude after a talk.

As an introvert myself, I can really relate to this book. It challenges you to look inward and embrace who you truly are.

“One of the things I’ve always felt,” Steve told me, “is that if you’re going to be creative, it’s like jumping up in the air; you want to make damn sure the ground is going to be there when you get back.”

Steve Jobs is still considered the most innovative entrepreneur of all time. But he also displays questionable leadership during different phases of his life.

This book tries to answer the central question: How did an arrogant, reckless, young man, who eventually got kicked out of his own company, become one of the most effective business leaders in the world?

The book examines Steve Jobs’ background, philosophy, and the people around him. Writer Brent Schlender also knew Jobs personally for 25 years. And this book takes material from their on-and-off record interviews and conversations over the years.

I also enjoyed Walter Isaacson’s book on Jobs. But this one gives a better picture of Job’s career.

“If the rules are such that you can’t make progress, then you have to fight the rules.”

Elon Musk was a bright kid who was abused by his father and bullied in school. After leaving South Africa, he studied at the University of Pennsylvania. He paid his way through university by throwing massive parties and turning his house into a club.

In 2002, eBay acquired Paypal, one of Musk’s successful dot-com companies. And from there, he began his “lost years,” investing in electric cars and rockets.

Really fascinating to read about Musk as he is still in the prime of his career.

Published in 1954, this book has become a classic in modern management practices.

In The Practice, Drucker talks about the most important question to succeed in management: “What is our business?”

By creating a systematic way to answer that question, a business gains a clearer and more focused view of its mission and goals.

I must say: This is a dry read at times. And probably not relevant unless you’re a manager, but it’s packed with lessons to lead a team or organization.

No book can teach everything about leadership

We can only learn so much about leadership from books. The rest of the time, we learn through practice, taking calculated risks, and learning from our mistakes.

These books are best seen as guides. Look at how successful leaders lived their lives or made their decisions.

What was their reasoning or thought process behind the things they did? Once you understand those, you can make your own decisions. That’s what true leaders ultimately do.