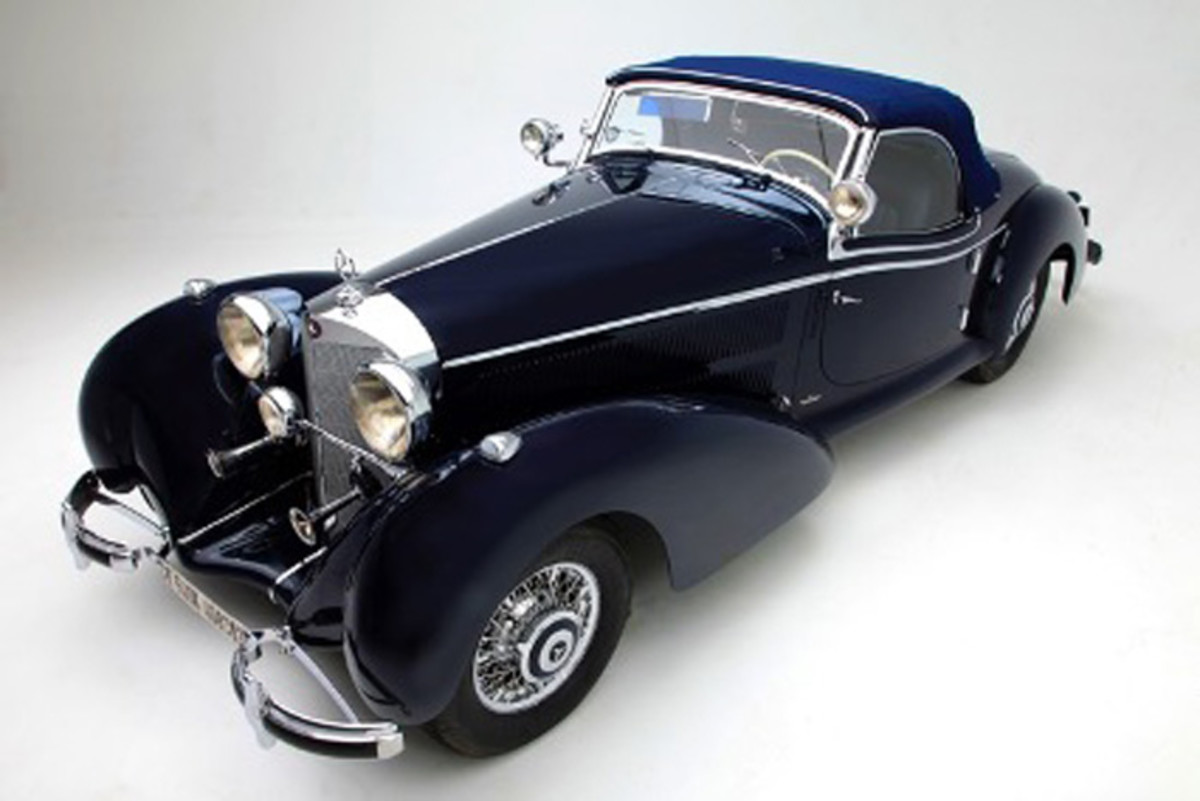 Broad Arrow Auctions – Broad Arrow Auctions has announce a unique 1939 Mercedes-Benz 540K Special Roadster as a highlight consignment to the upcoming Monterey Jet Center Auction on Thursday, August 18th. The Mercedes-Benz 540K Special Roadster is one of the true crown jewels of the Classic Era of motor cars. Incredibly rare, stunningly beautiful, a cherished centerpiece for collectors worldwide – chassis 408383 is the perfect representation of those enviable qualities.

The original owner of the Mercedes-Benz, Rolf Horn of Berlin was known to operate an exclusive and high-end interior design and accessories boutique and as such, he was recorded to have been closely involved in the original design of this 540K Special Roadster. While the core of the design is clearly Sindelfingen, Horn specified subtle, yet unique revisions to the coachwork including desirable sculpted lowered doors that incorporated disappearing roll up windows, a dramatically sloping and opening windshield, a full covered spare tire and perhaps most attractively, two long and impressive distinctive lines of louvers replacing the rectangular hood screens.

Donnie Gould, Partner and Senior Car Specialist said, “A motor car unrivaled in its presence, the Mercedes-Benz 540K Special Roadster represents the very best of literally everything of the era. Ownership provides immediate entry into the finest events worldwide while also allowing for inclusion within one of the most select of ownership circles. This Supercharged five-speed 540K is as impressive to drive as it to look at and I am certain the next owner will appreciate the meticulous care that the car has received under its current ownership.”

Notably, all Mercedes-Benz 540K models were highly desirable when new. Chassis 408383 was no exception and over the course of the ensuing three decades it found its way to Sweden from where it was purchased by noted collector and trader Tom Barrett and eventually passed into the long-term ownership of Major General William Lyon and the Lyon Family Collection where it would remain until 2011. After the car was restored and sold to a new owner, 408383 underwent a complete refreshening by RM Auto Restoration that then set the car, now finished in a deep and rich dark blue, on a new path that would lead it to events around the country including the Amelia Island Concours d’Elegance where it was awarded best in class as well as the Pebble Beach Concours d’Elegance where it won a Second in Class award. The 540K Special Roadster received additional awards at the Pinehurst Concours d’Elegance, Winter Park, Boca Raton, Hilton Head, as well as a Best of Show at Mar-a-Lago.

The 1939 Mercedes-Benz 540K Special Roadster has been maintained in exceptional overall condition. It performs just as a top-of-the-line, supercharged pre-war sporting and luxury car should and it joins an exceptional offering of similarly exquisite and desirable motor cars at the Broad Arrow inaugural auction.

Broad Arrow Group and its subsidiaries — Broad Arrow Auctions, Broad Arrow Capital, and Collectors Garage — represent the collective vision of its founders, team members, and partners — to be the best advisor, marketplace, and financier for car collectors, with integrity, trust, and innovation. Broad Arrow Group was founded in 2021 to develop and operate a portfolio of businesses and brands that address the needs of various segments of the collector car market and to transform the collector car industry.  In January 2022, Hagerty (NYSE: HGTY) made a strategic investment and became a joint venture partner of Broad Arrow Group. Learn more at www.broadarrowgroup.com.

Want a taste of Old Cars magazine first? Sign up for our weekly e-newsletter and get a FREE complimentary digital issue download of our print magazine.

*As an Amazon Associate, Old Cars earns from qualifying purchases.