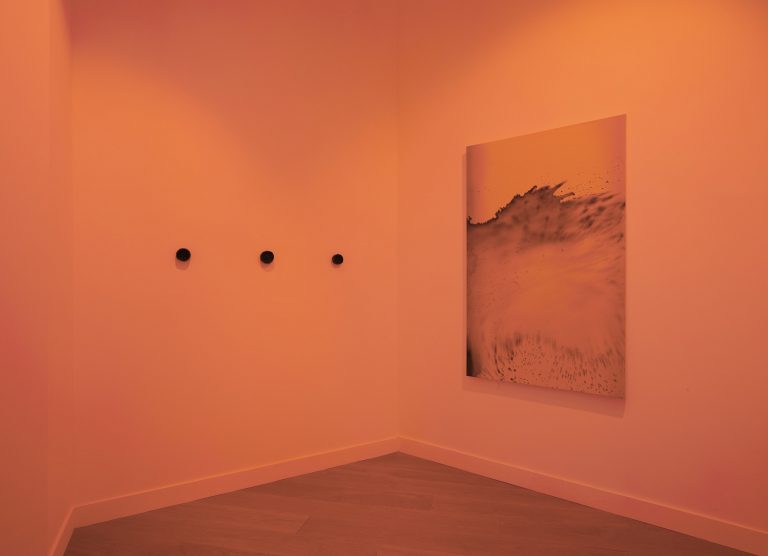 In a dedicated subterranean space of 5 rue du Pont de Lodi, “Carte Blanche” presents paintings by Camille Henrot alongside invited artist Elizabeth Jaeger and writer in residence Estelle Hoy. While created separately, the works exhibited in this spontaneous collaboration rhyme with each other, inciting a deep psychological space in the depths of kamel mennour gallery. In response to the visual works, a collaborative sound installation between Henrot and Jaeger was made with a string and the crack of a door, creating a whistling white noise reminiscent of sounds heard when in the womb.

Presented alongside paintings by Henrot, Jaeger’s sculptures further explore the angst of interiority and the relationship between corporality, perception, consciousness and emotion. The walls are inhabited by anthropomorphic black ceramic vessels, placed on steel structures in a game of surreal balances. The diffuse emotionality radiated by the vases is consciously broken by the hardness and severity of the metal plates. The miniatures alongside contain characters placed within organic seemingly claustrophobic forms. Some manifest expressions of pure existential dread, while others feature closed narratives– stories that are observed but whose details remain private.

Estelle Hoy presents texts in the gallery space that will also be published on the kamel mennour Instagram account as a weekly ‘feuilleton’ throughout the duration of the exhibition. Told through the voice of an unreliable, amorphic narrator, Hoy’s character(s) seem to enact all of the multiple, conflicting impulses and emotions of everyday life and of our modern times.