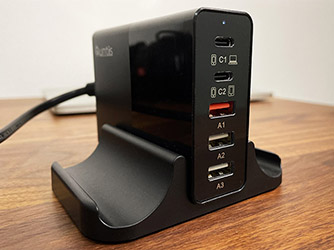 Instead, it focuses on handling multiple connections (five ports) and, since it will sit nicely on the desk, it’s easy to charge multiple devices at the same time. I do appreciate the dual-port wall charger, but I loathe having to deal with multiple cables hanging down from the power socket, so the Quntis 65W charging station is a more elegant solution.

I still think that it wasn’t the best decision to skip the GaN technology, not now when even Apple finally entered the market, but I suppose the price is lower, right? It’s a competitively priced device and I am not really sure that people will consider the lack of GaN a deal breaker if the charger works as intended and has a clean enough power output.

Furthermore, I noticed that it does have over-voltage protection, as well as protection against over-current, short circuits, overloading and against high temperature. And non-GaN fast chargers are notorious for having a higher heat output (we’ll check how hot the charging station gets in a minute). After opening the package, I noticed that the Quntis 65W charging station has a rectangular case made of plastic, half of it being covered by a black matte finish and half by a glossy black finish.

Since it isn’t a wall charger, there is also a 4.9ft cable that you need to connect to the rear side of the device (has two connectors). The Quntis 65W charging station is less portable than other chargers, measuring 5.9 x 4.3 x 2.4 inches, so you’re not going to be able to carry it around in your pocket, but it should slip into a bag with ease.

But the nature of the Quntis 65W charging station is not really to be portable, quite the contrary, it wants to have a permanent spot on your desk which is why it also has a detachable stand. Its role is to keep the charger upright, so it will not fall over – it’s also possible to keep the charger on its side, although it’s very much possible that it will move around (the stand has four silicone feet to keep the charger in place).

On the front side of the charger, there is a small LED which will light up white when the device is connected to a power source and underneath it, there are five USB ports. The first two ports are USB-C (PD), but they’re not identical. The topmost one supports up to 65W, while the second one has a maximum power output of up to 30W. In case you use both of these ports at the same time, then the first will limit the output to 45W and the second to 18W.

Before checking out if these values hold true, I decided to see how much power the Quntis 65W charging station needs when in idle mode (when no device is connected). That’s because some chargers do have a surprising high power consumption (the Hyphen X 100W). Rest assured, the Quntis 65W charging station does not consume a large amount of electricity when in idle mode, just enough to keep the LED turned on (a smart socket displayed 0W).

Moving on to the test, I first connected a 13-inch MacBook Pro using the original Apple cable (yes, cables do matter) and I checked the first USB-C port. The power output was very close to the 65W that were advertised (I assume there’s some overhead), so, while I was pushing the laptop a bit more than usual, it showed an average of 58W, the voltage moved a bit from 20.28 to 20.29V and the amperage was very much stable at 2.87A.

Then, I decided to connect another device to the secondary USB-C port at the same time as the MacBook Pro. And the connection to the laptop was paused for a brief second to recalculate the power output and then the 45W limit came into effect.

As you can see the primary USB-C port shows an average of 43W, the voltage was stable at 20.26V and the amperage also stood still at 2.16A. I also need to see the power output of the second USB-C which should be around 30W and indeed it is. The power output was an average of 28W, the voltage stood still at 20.17V and the amperage was also very stable at 1.42A.

I have noticed that the original charger that came with the MacBook Pro does fluctuate these values a lot more, so it’s nice to see that the Quntis 65W charging station can find the proper output quicker and sticks to it immediately. I also need to mention that in case I connected a device to the first USB-A port, the two USB-C ports would turn off to recalculate the output, but not the second and the third USB-A ports.

That’s why I think that the first two ports have a separate controller, while the last two USB-A ports are pretty much unbothered by what happens above them. This means that if you have devices that need a constant power input, then use the two bottom-placed USB-A ports.

Connecting a smartphone to one of the last two USB-A ports showed that the power output was on average 7.6W which is in line with the advertised 10W – the voltage sat solidly at 5.23V and the amperage moved from 1.28A to 1.53A. How about the heat?

As I said in the intro, the non-GaN chargers do lose a lot more heat, so yes, the Quntis 65W charging station is going to run a bit hotter than other GaN chargers. But, it doesn’t seem to get too hot to the touch and there is heat protection in place. 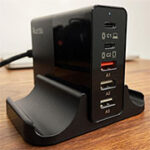 Mark is a graduate in Computer Science, having gathered valuable experience over the years working in IT as a programmer. Mark is also the main tech writer for MBReviews.com, covering not only his passion, the networking devices, but also other cool electronic gadgets that you may find useful for your every day life.