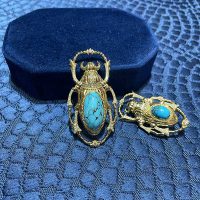 Greetings from Las Vegas! Fam, I have it on very good authority that malachite and turquoise are going to be a very big deal in the coming months. I probably should have told you after I interviewed a bunch of industry pros to find out what they bought at the Tucson gem shows. (You can find that story in the current issue of JCK, copies of which are in abundance here at the show.)

But knowing that between Luxury and JCK Las Vegas you will have access to quite of a bit of the material, now seems like a good time to bring it up  (don’t worry, I’ll tell you where to find it).

Danielle Miele of Gem Gossip told me that in Tucson she bought all the malachite bowls she could carry, and that “they sold out within three minutes of offering them for sale” on her e-comm platform @shopgemgossip.

Nan Lung Palmer of LuxeRox was also hunting Tucson for lifestyle objets and her business’s signature palm-size specimens, but she and partner Kelly Selcer were also seeking “something more substantial with a wow factor” for retailers looking to enliven their display cases. That came in the form of velveteen malachite from the Democratic Republic of Congo “which has a striking emerald-green color with high chatoyancy and beautiful banding, similar to gem-quality malachite jewelry,” she said.

Laura Kitsos owner of Gem Jewelry Boutique in Oak Park, Ill., observed that turquoise and malachite were front and center at the many shows she attended, and she has an interesting theory as to why: Remember this winter when we were all watching And Just Like That (the Sex and the City reboot) and trying to decide if we liked it? Carrie wore a necklace composed of both turquoise and malachite beads (by Fry Powers) in many of the episodes. The jewel, surmised The New York Times, could be a front-runner for the 2020s version of her wildly influential “Carrie” nameplate necklace. And now that the show has been confirmed for a second season, we will have to see.

I say be ready with some options. Besides, it’s not like turquoise and malachite have been out of the spotlight or anything. We’ve been telling you about the “blues and greens” trend for awhile now.

Buyers, you know what to do. Here’s where to go and what to see.