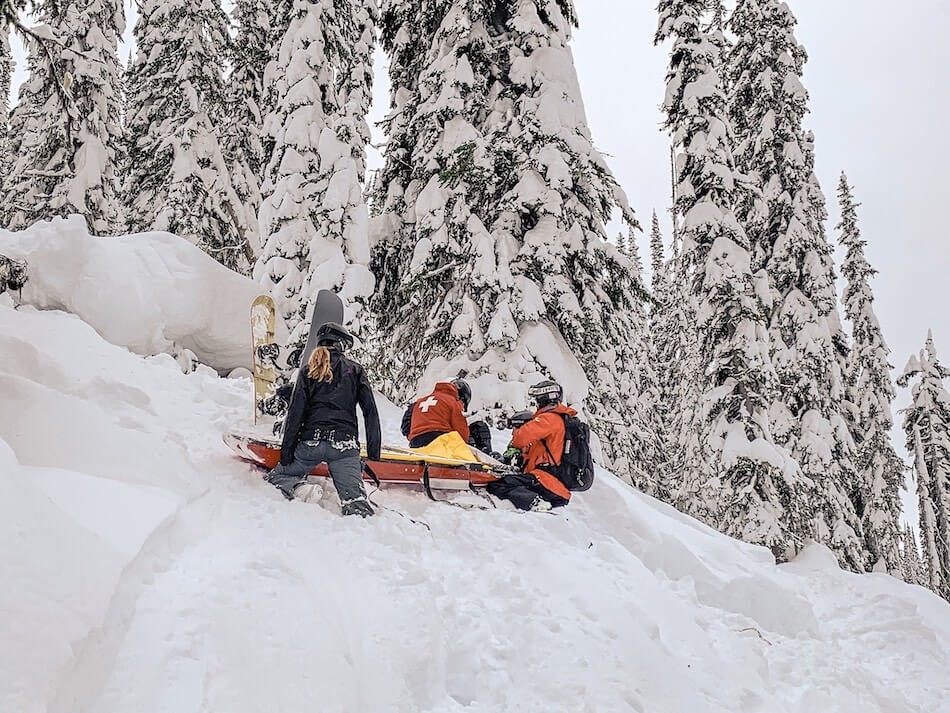 The day started like any other – up early, a big cup of coffee and some light stretching before a breakfast of champions and a shower. It was January 5, 2019, and the day held great promise that a weekend of snowboarding at Revelstoke Mountain with good friend and leadership mentor Jon Cheplak would be invigorating, challenging and, most of all, a good laugh.

How that day at “powder paradise” ended changed my life forever.

Under gray skies and on top of a record 70 cm of fresh powder that had fallen during the previous two days on North America’s most vertical elevation, I was feeling invincible and game for anything. That was my first mistake.

We exited the advanced and expansive North Bowl and entered a serene and breathtaking tree run. At the end of that run was a pillow top, or snowpack, with a 10-foot drop about 50 yards from the cat track. I ignored Jon’s repeated advising hollers that I should go around the pillow top, not over it. That was my second mistake. (Always listen to your coach.)

Unable to catch the necessary speed to make it over cleanly, I landed where I didn’t want to – in a mangled mess on the flat part of the pillow top. On impact, I felt the immediate crushing pain of bones shattering in my right knee. I grabbed my upper leg to stabilize the knee and fell back into the snow. Jon quickly located and secured the ski patrol, and I was taken down the hill in the “sled of shame” and to the local hospital emergency room. I was in shock.

I ended up at Revelstoke Hospital, a long way from my home base of Calgary, where the admitting nurse, upon hearing my name, told me that her property in Cochrane was listed with Justin Havre & Associates. Through the pain, I was able to smile at her. It was one good piece of news in an otherwise distressing day.

Only after they administered pain medication could they go near my ski boot. “No,” I begged in agony. “Don’t pull, just cut the boot off.” Lacking the equipment, they told me I had no choice; they had to pull it off themselves. That did not go well.

While I let out otherworldly shrieks and howls, the nurse held my shin as another started to pull the boot off. They could only get the boot just slightly over the heel before my increasingly blood-curdling screams demanded they stop. Then these words: “Why did you stop? Let’s just get this done.” With one more mighty yank, the boot fell to the floor. I felt adrenalin rush through me the way it does when your body is begging for mercy.

After being x-rayed and stabilized, I was notified by the attending doctor that I was at high risk of ‘compartment syndrome’. In plain English, I was facing the real possibility of a partial leg amputation.

I was transported by ambulance to a surgical hospital two hours away in Vernon B.C., where I spent almost a week waiting for a limb-saving operation. It was only after the surgery that I learned just how badly I had injured myself. I had shattered my knee, broken my tibia and fibula and to “cap” it all off, torn my patella tendon right off the bone.

I was helpless and on edge, fearing I would lose everything I had fought so hard to build and protect – my business, my mental health, and my mobility. Such is the emotional anxiety that comes with a limb-threatening injury, and I felt the full weight of it on me. There were times lying in that hospital bed that I just focused on one-minute victories. It was me vs. the pain.

I was deeply grateful to have the support of my partner Carmen, who flew out on two separate occasions during that hellish week in Vernon to comfort and console me, and finally to help transport me back to Calgary where she cared for me 24 hours a day. Without her love, strength, compassion and support, I don’t know where I would have been with my recovery. Her dog Olive chose to become my dog Olive during those bleak two months after the accident when the couch served as my bed, kitchen and bathroom all in one. That feisty little terrier has never left my side since.

I had a business to run, a family to look after and, after my operation, a whole lot of rehab in front of me to walk again. I had always been involved in every aspect of my business and the knowledge that I could no longer do that now was a tough pill to swallow. But swallow it I had to, and the results were beyond my expectations.

With a team of 30+ real estate advisors under my leadership at the time, I had to let go and trust they all had the best business structure and training in place to step up to the leadership plate and lean into my business when called upon in a way that I had not allowed them to do before. And they did it with skill and smarts.

Letting go is not something I like doing. I’m a work in progress, but I have learned that when you operate a business, everyone must be held to the same high standards you hold yourself to. You should be able to trust those around you to pick up the pieces and move forward. You should be able to let good people become great people.

When you have few options in front of you—when your health has to come before all else—will you be able to let go and know you have the right team behind you to step in and step up? There is nothing more important in business and in life than having the confidence in your people to have your back.

If you have clarity in your corporate structure, a good handle on your priorities, processes and protocols, and the know-how to build on them, you can let go and free yourself up for the big picture.

For those of you wondering how long it took me to walk again, I spent the better part of a year in rehab three hours a day, five days a week for acute muscle atrophy. You name the therapy, I did it – physio, stretching, fascia sculpting, laser, ozone, electro pulse, Bemer microcirculation, shock wave, strength training, Graston technique, acupuncture and more. Almost three years later, I am still rehabbing, but I have almost regained full mobility in my knee. In the future, I will experience arthritis and I will need a knee replacement.

In the classroom of letting go, I am still learning.