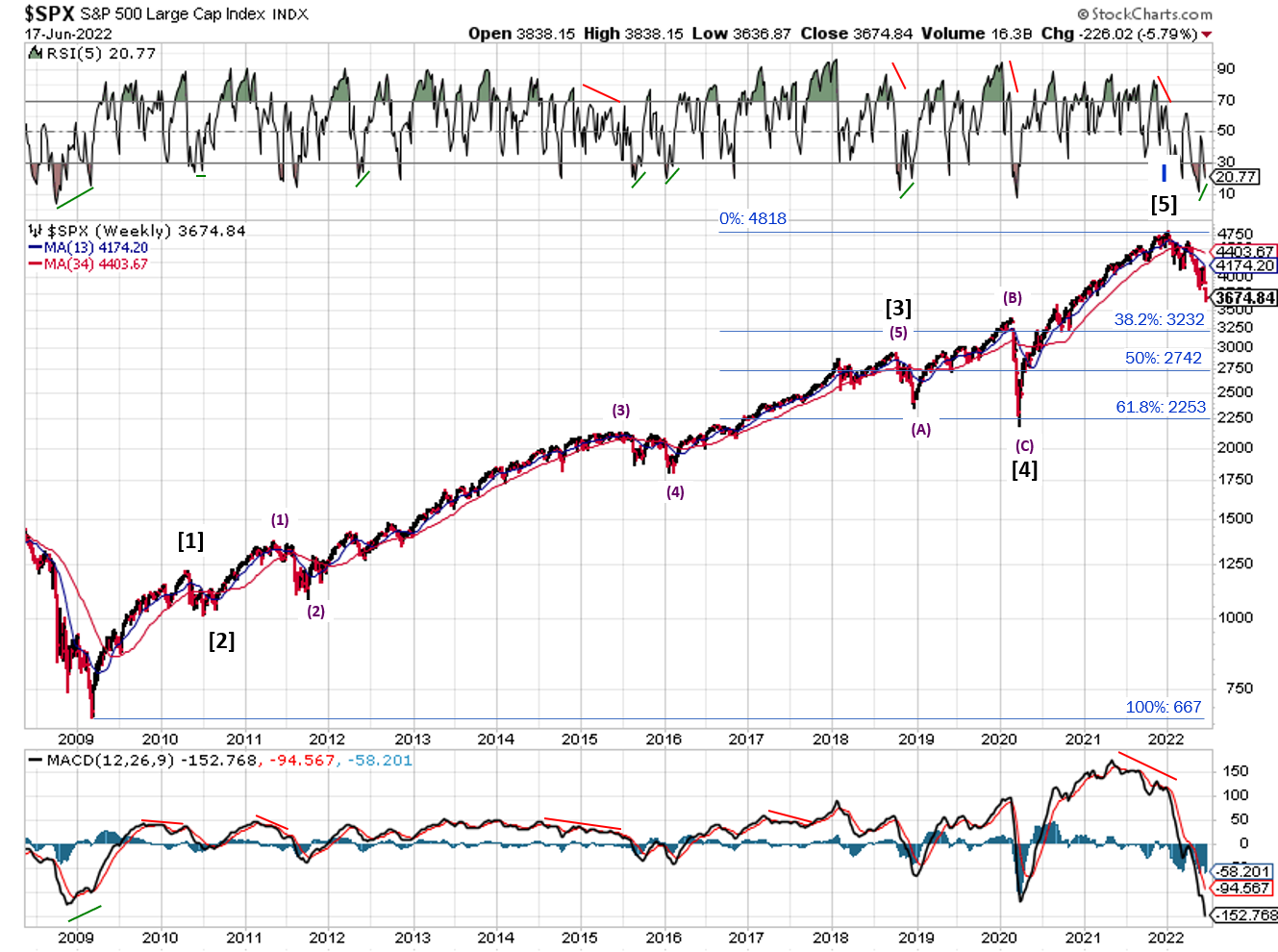 ANALYSIS
The stock market outlook downtrend continues, following last week’s sell-off.  The S&P500 ($SPX) tried to recover midweek, but gapped down Thursday before the open, and basically stayed at that level through Friday.

The ADX and price/volume signals are bearish, and Elliott Wave is back to a downtrend.

Between the Fed meeting and the massive option expiration, the stage was set for a potential rally back to resistance near 4400.  Instead, the pre-market gap-downs on Monday and Thursday increased the probability that the “3-wave pattern” completed in early June (verses the prior count that put the index in the middle of that pattern). 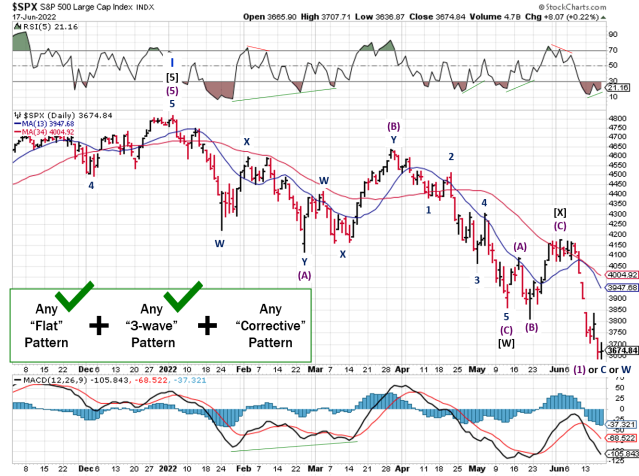 SPX Elliott Wave Analysis for the Week of June 19 2022

The good news?  Regardless of which count prevails (both are still possible at this point), the market is due for a counter-trend rally.  The 3600 level is prior resistance turned support (August 2020), and a positive divergence developed in the RSI as well, so maybe this week will give traders some relief.

Before you break out the champagne, keep in mind that the bear market is just getting started…the SPX hasn’t even reached the 38% retracement level yet.

SPX Elliott Wave Analysis for the Week of June 19 2022

COMMENTARY
As expected, a lot of volatility last week. Things kicked off with a bang, with another cryptocurrency-related blow-up. This time it was an exchange (Celsius) halting all withdrawals from its platform. Unfortunately, blow-ups like this will occur more frequently as liquidity is removed from the system (i.e. qualitative tightening).

Then “someone” leaked that the Fed was likely to hike interest rates by 0.75%, rather than the 0.5% they forecast in May. The rumor quickly spread, and basically became a sure thing in the eyes of most financial media. They even debated whether the Fed should raise by 1% or more! On Wednesday, the Fed did raise rates by 0.75%, citing recent inflation data shifting their view.

Back in reality, the near-term impact to inflation is minimal, and that wouldn’t have changed if the Fed hiked rates 2%! Markets would’ve dropped bigly, but inflation? Not so much. For the rest of the year, supply and demand factors are pretty much locked in. Even if we’ve already seen “peak” inflation, the numbers will remain high for a while, so strap in.

The situation isn’t any better across the pond, as the European Central Bank (ECB) did an about face and is now set to raise interest rates. The ECB confirmed a 0.25% hike in July (its first increase in more than a decade), and hinted at a larger increase in September if inflation remains high.  And just like the U.S., the hikes are in spite of the fact that the Euro-zone is experiencing an economic slowdown.

A short trading week in the U.S., with the markets closed for Juneteenth National Independence Day, to celebrate the end of slavery in the United States.

Best To Your Week!

Invest Safely, LLC is an independent investment research and online financial media company.  Use of Invest Safely, LLC and any other products available through invest-safely.com is subject to our Terms of Service and Privacy Policy. Not a recommendation to buy or sell any security.