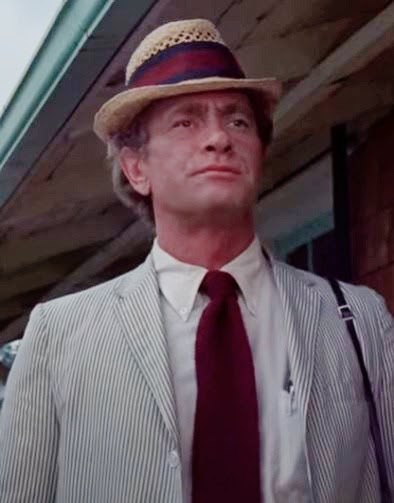 Things have not gone well for brash reporter Carl Kolchak since he destroyed a vampire in Las Vegas in The Night Stalker (1972). Most people don’t believe his story and those who know it’s true have quashed it. After relocating to Seattle, Kolchak (Darren McGavin) convinces his former editor Tony Vincenzo (Simon Oakland) to hire him at the Seattle Daily Chronicle. His first assignment involves the murder of a young woman who was strangled.

Kolchak quickly discovers the most recent murder is one of a series of killings with the same modus operandi. With the help of newspaper researcher Titus Berry (Wally Cox), Kolchak discovers a bizarre pattern of homicides: Every 21 years, six women are killed in the vicinity of Pioneer Square within a period of eighteen days. In each case, the victims’ necks are crushed and a small amount of blood is drained by the base of their skulls. Kolchak presents his facts to the police, but they reject the notion that they’re chasing a killer who is 144 years old!

The Night Strangler (1973) adheres closely to the formula that made The Night Stalker a rating smash the previous year. Once again, Kolchak proves capable of doing anything to get his story–even risking the life of an undergraduate student/exotic dancer played by Jo Ann Pflug (who admittedly agrees to serve as bait). Carl belittles the police for not doing enough and engages in shouting matches with his editor (who took a huge risk in hiring Kolchak after Vegas).

Indeed, the Kolchak character could be downright unlikable if not for the fact that he’s played by Darren McGavin. The actor finds the key in portraying his larger-than-life character: For all his huff and puff, Kolchak just wants to uncover the truth. Kolchak provides his own comic relief at times, but he’s also willing to do what it takes to make the streets of Seattle safe again.

Personally, I find The Night Strangler more entertaining than The Night Stalker, largely because producer-director Dan Curtis (Dark Shadows) cast a colorful group of classic Hollywood actors in supporting roles: Scott Brady plays the tough police captain, Margaret Hamilton pops up as a college professor with knowledge of the occult, and John Carradine is the Chronicle‘s publisher. The best supporting performance comes from the always reliable Wally Cox, whose greasy-haired researcher toils in the bowels of the newspaper’s building. Also, be sure to look quickly for Nina Wayne as another exotic dancer; she is the sister of the late Carol Wayne (a semi-regular on The Tonight Show).

Richard Matheson (Duel), who wrote the teleplay for The Night Stalker, penned an original story for The Night Strangler. It also works better than the previous film, because the audience doesn’t know what kind of monster is causing the mayhem. The climax in the Seattle Underground is also genuinely creepy. Note that there are two different versions of The Night Strangler, a 72-minute cut that aired in 1973 on the ABC Movie of the Week and a 90-minute cut released overseas for theatrical distribution.

There are numerous stories about planned Kolchak films that were never made. In a 2004 interview, Dan Curtis said he wanted Kolchak to go to New York City and discover that Janos Skorzeny–the vampire from The Night Stalker–was not destroyed after all. Alas, that film was never made because ABC decided to make a TV series with McGavin called Kolchak: The Night Stalker. Now something of a cult show, the series only lasted for 20 episodes. It quickly became redundant with Kolchak fighting a new creature every week. I think Carl Kolchak would have lasted a lot longer had the character been featured solely in one or two movies a year.