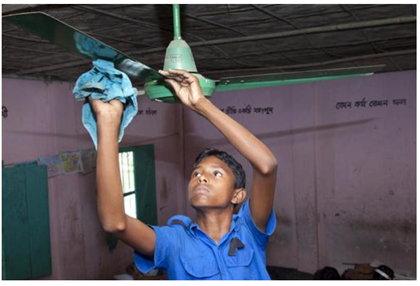 Global temperatures are on the rise. The world is on track for 2022 to be somewhere between the fourth and eighth warmest year since records began in the mid-1850s. This matters for education. Temperature and air pollution can significantly affect learning outcomes, as this blog will show.

Source: NOAA Climate.gov graph, based on data from the National Centers for Environmental Information.

One study reported in the 2020 GEM Report on the relationship between extreme temperatures and education attainment in 29 countries found adverse effects on schooling, even among wealthier households. In South-eastern Asia, a child who experiences temperatures 2 standard deviations above average is predicted to attain 1.5 fewer years of schooling. Analysis of the impact of extreme heat on the college entrance examination results of 10 million students in the United States showed that those who experienced hotter days before an examination had lower achievement and that extreme heat was especially detrimental for poor and minority students. A 1.8oC increase in average school year temperatures lowered learning outcomes by 1%, as did 6 days above 32.2oC. Air conditioning, meanwhile, almost entirely offset these effects. In the 2015 Trends in International mathematics and Science Study, over 30% of head teachers in Bahrain, the Islamic Republic of Iran, Kuwait, Oman, Saudi Arabia, Turkey and the United Arab Emirates reported that insufficient cooling in schools substantially affected student learning.

Studies in China and Costa Rica also found that a decrease from 30°C to 20°C in classrooms would increase test performance by 20%, on average, assuming that the optimal temperature is below 22°C. And these extreme temperatures are considered more severe for children in classrooms than adults in offices, where it is estimated that the optimum temperature threshold is higher.

It isn’t only temperatures, but also air pollution that is taking its toll on learning. Polluted air can reduce cognitive ability significantly and perhaps irreversibly, given suspected neurotoxicity. In Israel, a study found that even temporary exposure to dust reduced students’ examination performance and post-secondary education attainment. A cohort study of almost 3,000 children in Barcelona, Spain, found that, adjusting for socio-economic status, those exposed to high pollution levels in school had less cognitive development growth than peers in less polluted schools.

In the United States, children attending schools downwind of a major highway, and as a result experiencing more air pollution, had lower test scores, more absences and more behavioural incidents than peers attending otherwise similar schools located upwind of a highway. Effects were larger for busier roads and continued after children left downwind schools. Analysis of chess player behaviour gives some insight on this area. It has been estimated that a standard deviation increase in dust raised both the probability of making an error when playing chess and the magnitude of errors.

Indoor air quality is often much poorer than is thought. Buildings can magnify or emit pollutants, for instance from building materials, devices and volatile chemicals in furnishing. In the United Kingdom, a study on London schools found higher levels of damaging air pollution inside classrooms than outside, putting children at risk of lifelong health problems.

Although most evidence comes from the Global North, implications are particularly worrying for the Global South, where pollution levels are higher, industrialization is increasing and global warming effects are likely stronger, presenting mounting challenges in providing suitable learning environments. Schools in India, Mexico and Thailand close when air pollution exceeds certain levels; they closed twice in Delhi in 2021. A study examining the effect of a 2oC rise in global temperature by 2050 forecasts that 22% of cities will experience climate conditions not currently experienced by any major city.

The impact of air quality and temperatures is likely to become more of a preoccupation in classrooms, what with global estimates of there being a 93% chance that the five-year average of temperatures for 2022-2026 will be higher than in 2017-2021 and that air pollution will subsequently become the world’s top environmental cause of premature mortality, overtaking dirty water and lack of sanitation.

This calls for governments to think twice when designing schools. Buildings need not only to provide suitable learning environments but should be carbon neutral and limit other pollutants. Building design can play a role, but mechanical ventilation and air filtration, and their associated costs, need to be planned for as well if we are to fight back against these developments.