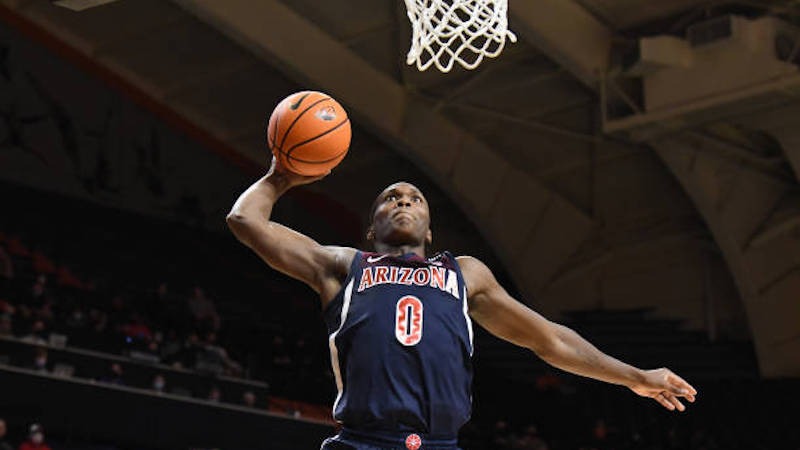 In Mobley and Williams, the Pac-12 had multiple players go in the Top 10 for the first time since 2017.

Mobley was the highest-ever selection from USC; OJ Mayo also went 3rd in 2008. Williams’ selection means that Stanford has now seen a player drafted in each of the last three NBA Drafts.

Chris Duarte was the highest-drafted Duck since Luke Jackson went 10th in 2004, and Christopher was the first Sun Devil selected since 2013, as well as the highest ASU player since James Harden went third in 2009.

The four selections last year marked the Pac-12’s lowest number of players selected since 2012 when the Conference only had three players taken.

Oregon and USC have had at least one player selected in each of the last four drafts, but those, along with Stanford’s run of three in a row, will come to an end this season.

While those schools’ streaks will most likely end, the Pac-12 should again be well represented among the 60 picks on Thursday night.

That streak will certainly continue this year with Arizona’s Bennedict Mathurin being a lottery selection. He should hear his name called in the first 10 picks.

Mathurin should be joined in the first round by fellow Wildcat Dalen Terry who should be a mid to late First-Rounder. Terry could possibly sneak into a lottery spot depending on how the draft plays out ahead of him.

Christian Koloko will make it three Arizona players drafted but will probably be an early second-rounder and could slide into the end of the first round if the right team is out there.

In addition to the trio of former Wildcats, the Conference could see another three players selected.

Jabari Walker of Colorado should go in the Second Round while a pair of former UCLA players could be Second-Rounders in Peyton Watson and Johnny Juzang.

If all three players from Arizona are selected it would equal their total from the 2020 draft when three Wildcats went, with two going in the opening round.

Mathurin would be the 20th Arizona player all-time to be a lottery pick.

If either Watson or Juzang is selected, they would become the first UCLA players drafted since 2019.

The two-year draft drought for the Bruins is their longest since they had a similar two-year stretch without a draft pick in 1957 and 1958.

The last time UCLA went three years or more without an NBA draft choice was 1951-53. If they both go in the Second Round, it will mark four drafts in a row without a First-Rounder from UCLA.

Aaron Holiday in 2018 was the last First-Rounder for the Bruins. The last time UCLA had a First-Round drought as long was a five-year stretch covering the 2001-2005 drafts.

Walker would be the first Colorado player selected since Tyler Bey went in the Second Round in 2020. The Buffs have not had a First-Round selection in the NBA Draft since Derrick White went 29th overall in 2017.

Walker would be the sixth Buff to get drafted since Colorado joined the Pac-12. It would also mean that 17.6% of their all-time draft picks were from the Pac-12 era.

Only Oregon and Arizona would be able to claim a higher percentage of all-time selections coming from the Pac-12 era.

Should Mathurin’s stock end up skyrocketing in the coming days and he ends up going first or second overall, he would become the 18th player from a Pac-12 Conference school to be selected Number One or Two overall.

The 17 players selected either No. 1 or No. 2 overall in the NBA Draft is the third-most of any conference among current members trailing only the 26 of the ACC and 23 of the Big Ten.

During the Pac-12 era, the five Top 5 selections have come from five schools: Arizona (2), Washington, UCLA, USC, and Cal.

All-time, 633 players from Pac-12 schools have been drafted. As one would expect, UCLA has had the most players selected with 123

(First and Second-Round totals do not add up to the total drafted as it includes rounds 3-17 from earlier years. Sorted by First-Rounders)

UCLA and Arizona both rank among the most all-time first-round selections by schools with both in the Top 12 nationally.

Players Selected in Pac-12 Era with % of Overall Picks

Since the Conference expanded in 2011-2012 by adding Colorado and Utah, the league has seen a total of 72 players selected in the NBA draft with 41 going in the opening round.

UCLA and Arizona have continued to lead the way. Oregon, Washington, Arizona, and Colorado have seen the largest percentage of their all-time picks being selected during the Pac-12 era.

writes a stats and records analysis column for SportsPac12. He also founded and runs the Sports and Entertainment Research Center (SERC).