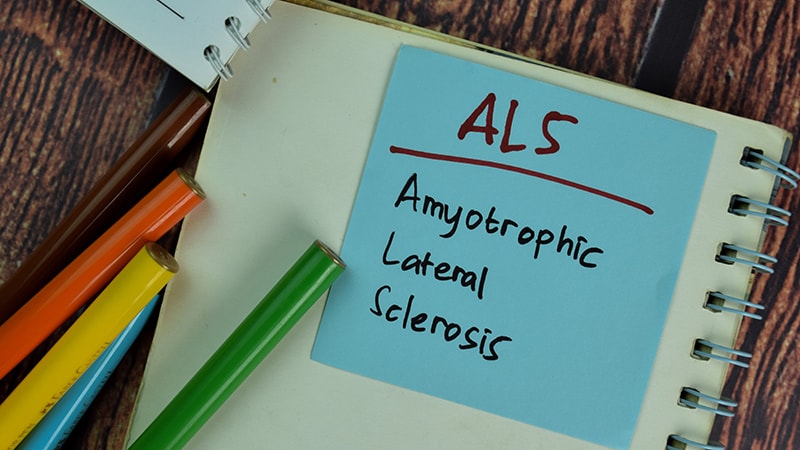 The 1-year results, presented at the European Network for the Cure of Amyotrophic Lateral Sclerosis (ENCALS) 2022 meeting, show a deceleration in functional decline that is similar, but “more pronounced” than the previously reported 6-month results, which were not statistically significant, said lead investigator Timothy Miller, MD, PhD, professor of neurology and director of the ALS Center, Washington University, St. Louis, Missouri.

Now, with 6 more months of data, Miller said he is confident that tofersen is slowing down the neurodegenerative disease process. “I see results that I’m encouraged by,” he said. “As a clinician who treats people with ALS with this mutation, I would want this drug to be available to people that I see in my clinic.”

The primary efficacy objective of the VALOR study was to show the 28-week impact of 100 mg tofersen (three doses given about 2 weeks apart, then five doses given every 4 weeks), versus placebo, on function, measured on the Amyotrophic Lateral Sclerosis Functional Rating Scale–Revised (ALSFRS-R). The open-label extension switched placebo-treated patients to tofersen (delayed-start group) and continued to compare them with the early-start group up to 1 year. This open-label extension phase included 49 patients who had been on early-start tofersen and 18 patients in the delayed-start group.

For the primary endpoint, change from baseline in 48-point ALSFRS-R score, there was a statistically significant benefit for the early-start patients with these patients scoring 3.5 points higher than the delayed-start group (P = .0272; 95% CI, 0.4 – 6.7). This means that both groups declined in function, which is expected in ALS, but the early-start group declined more slowly.

There was also a benefit associated with early-start tofersen for a number of secondary endpoints, including change from baseline in total SOD1 cerebrospinal fluid concentration (CSF SOD1), plasma neurofilament light chain (NfL) levels, and respiratory function.

“This drug targets the MRNA of SOD1, so it lowers the MRNA and then the SOD1 protein falls,” explained Miller, adding that these levels dropped 21% in the delayed start group, and 33% in the early-start group. “I think the data pretty clearly show that [tofersen] does what it is supposed to do, and that is the first step.”

Neurofilament light chain, a marker of neurodegeneration, also dropped by 41% in the delayed-start group and 51% in the early-start group.

Finally, muscle strength, as measured by handheld dynamometry (HHD) score, declined more slowly in the early-start group compared with the late-start group, with an adjusted mean difference in score of 2.8 (P = .0186).

While acknowledging that tofersen acts on a genetic mutation found in only about 2% of ALS, Miller said the study findings carry significance for the wider ALS patient population.

“Assuming we agree there is a clinical effect here, assuming we agree that there is real stabilization of clinical function, I think if we agree on that point then we know that ALS is now a treatable disorder. And that’s a really important point. I’m not sure that we knew that before,” he said. “Yes, there are FDA-approved medications that slow down ALS a bit, but they don’t stabilize it, and if we get the target correct — and we have the correct genetic target here — there can be a substantial influence on slowing down the disease, so that’s one thing to learn for the whole ALS community.”

Asked to comment on the study, Richard Bedlack, MD, PhD, who was not involved in the research, said the findings are important and show “clinically meaningful” results. “Based on the new benefit-to-burden ratio, I believe most of my patients with SOD1 mutations will want to try this drug. I would like to be able to offer it to them. But I am curious to see what the FDA will do with these data,” said Bedlack, professor of neurology at Duke University in Durham, North Carolina, and director of the Duke ALS Clinic.

“Sometimes that open-label extension gives us time to see differences between patients who initially got drug and those who initially got placebo. That seems to be the case with tofersen here, and it was also the case with AMX0035 [Amylyx Pharmaceuticals Inc.], which did not show a survival benefit in the first 6 months but did in the open-label extension.” A recent FDA advisory board panel concluded there was insufficient evidence of benefit for AMX0035, he noted. “I wonder if the same concern will be raised here, necessitating confirmation in another trial. I hope not, but only time will tell.”

Miller added that these results “highlight how difficult ALS drug development still is. Among the many uncertainties in setting up a trial (targets, doses, inclusion criteria, outcomes), we still do not know how long we need to treat patients in order to see statistically significant changes in the clinical measures we use (ALSFRS-R, respiratory function, strength, survival, etc.). Most American studies are 6 months long and most European studies are 12 months long. Longer studies may be more likely to show benefits on certain measures (e.g., survival), but they cost more, they are challenged by dropouts as the disease progresses, and the idea of randomizing someone to a placebo for a whole year is psychologically difficult for patients, families, and many clinicians (myself included). So, we are seeing more studies like this one where the first 6 months are randomized, blinded, and placebo controlled, and then there is an open-label extension that lasts many months more.”

This article originally appeared on MDedge.com, part of the Medscape Professional Network.