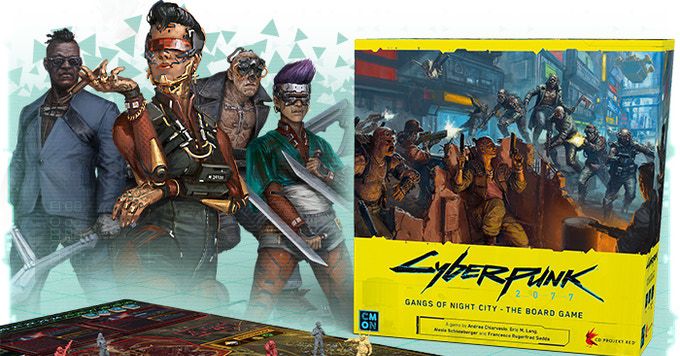 Cyberpunk 2077 is getting a board game courtesy of a Kickstarter campaign. Cyberpunk 2077: Gangs of Night City is a strange twist on the high-tech, low-life underbelly of the world brought to life by CD Projekt Red and Mike Pondsmith. The game is being published by CMON Games, which have put together board game adaptations of God of War and Bloodborne in addition to other existing IPs.

If the slang-ridden synopsis of the game provided on its Kickstarter page is any indicator, it’s clear that its creators have some serious reverence for the source material: “Cyberpunk 2077: Gangs of Night City is a competitive game in which 1 to 4 players take on the role of ruthless gangs vying for control of the underground in the glittering hellhole that is Night City. Clash with other gangs in the meat or on the Net as your enterprising band of toughs seeks to gain dominance over the criminal underworld that rules the streets. Only the boldest will be remembered, and your Street Cred will pave your way to the top.”

The aesthetics and fiction of this game appear to be more closely based on the Cyberpunk 2077 video game published by CD Projekt Red, as opposed to a riff on the source material penned by Mike Pondsmith in the pen-and-paper Cyberpunk RPG. In addition to its trademark crimson and neon-yellow aesthetic, this board game comes packaged with a pile of unpainted plastic miniatures that bear the likeness of notable characters from the video game. Players can expect to see Jackie Welles, Johnny Silverhand, and Judy Alvarez among the two dozen or so plastic minis that are planned to ship with the game.

At the time of publishing, the project has more than tripled its funding goal of $100,000 and is just shy of its final stretch goal with about 10 days remaining in its campaign. Currently, the only funding level available is set at $110 but nets you access to the core box and all the miniatures.

We understand that a hot pile of unpainted plastic is tough to resist, but it’s worth mentioning that the current timeline for shipping doesn’t start until at least eight months after the end of the Kickstarter. And just like Cyberpunk’s digital version, there’s no guarantee that it won’t be delayed.