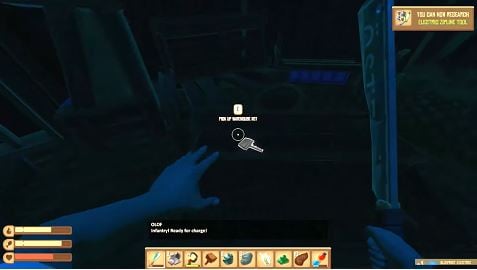 Raft’s new chapter includes new locations to be discovered and the players will get to Utopia after clearing Temperance Island. Utopia is the last location of Chapter 3. Utopia is a city and players will need to explore this location to get to the end of the story of the game.

In this guide, we tell you the location of the Warehouse Key and for what purpose you need it.

The Warehouse key is needed to progress further in the storyline after getting encountered by Olof, the main boss. Olof will attack you when you get up on the platform from the elevator. Once you got him to run away from the place, he was throwing bombs at you, your mission will be to follow him and defeat him. He will run away from that platform and go into a Warehouse.

To get into that warehouse, you’re going to need the Warehouse Key. The Warehouse Key can be found at the place from where he was throwing bombs. He will run from the back door of the room and you wouldn’t be able to catch him or hurt him during that time so, no point in trying to follow him or hurt him. You’ll need to go to the same room where he was and you’ll see that there is a blueprint on the table and right next to the blueprint, there is a key. That will be the Warehouse Key that you needed to get inside the warehouse where Olof just went in.

Pick up the Key and follow the path to the Warehouse. Once at the Warehouse, use the key to unlock the door and go inside.