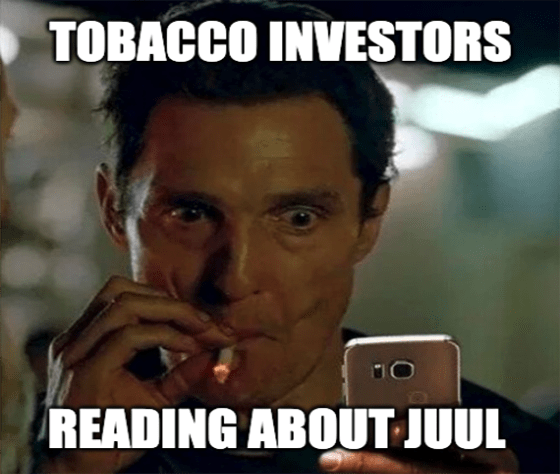 Who Will Save Your Lungs?

The FDA’s living its life for you on TV. It says the Juul’s no good for you, and you agree.

It says: “Hold those vape sales or wind up behind brick walls.” Says: “Come here, Altria, don’t care if you agree.”

Another doctor’s bill, a lawyer’s bill. And here you are — just tryin’ to get your thrill.

You know you love it if you put it in your chest, but who will save your lungs?

Oh, good one, Great Stuff. You would play some bastardized Jewel to talk about the FDA banning concerning vape carts … how very original.

Hey, next time I’ll give you the mic, and you can make the setlist.

Now, as your dry eyes have probably already deciphered, today we’re talking about the FDA’s latest attempt to nix nicotine from the U.S. market.

E-cigarette company Juul Labs — not to mention Marlboro-maker Altria Group (NYSE: MO), which bought a one-third stake in Juul back in 2018 for $13 billion.

Under the health agency’s new ruling, Juul will have to pull all of its vape products off the U.S. market effective immediately … or at least until some smoke-happy judge in the federal appeals court concedes with Juul’s countermeasure to block the vape ban.

Now, before all you nicotine fiends start wagging your yellow fingers at me, the FDA has its reasons for pulling the e-liquid pods from store shelves.

Officially, Juul provided “insufficient toxicology data” to the FDA to keep its vape products on the market — meaning they could be leaching harmful chemicals from their pods, and people wouldn’t even know about it.

Unofficially, this follows the FDA’s latest crusade to regulate nicotine use and eventually remove it from the market altogether. (Tobacco traders, you’ve been warned.)

I know, I know … it’s your body, and theoretically it should be your choice whether you want to blacken it with that tantalizing tar.

But stop and think of the children! Those poor underage users who gravitate toward Juul’s brightly colored cartridges. There’s still a chance to save them from a life of iron lungs … right?

Seriously though, does the FDA not remember those ill-fated stories of black-market THC cartridges killing a bunch of people a few years back? Because this is how you get black-market nicotine cartridges … mark my words.

With the FDA ushering in a new age of pod prohibition, people will just turn to less legal means to get their fix — you know, just like they always have. And if safety is really the agency’s concern in the first place … you have to wonder whether the ends really justify this crackdown on Juul.

But this is an investing e-zine, not a nicotine think piece. And from a pure investing standpoint, I can’t see how this week’s news is anything but bad for traditional tobacco companies and their investors.

The FDA has already proposed a new regulation that would ban menthol cigarettes and flavored cigars for their highly addictive qualities.

And what’s to stop them from taking it a step further by banning — or at least trying to tamper with — all cigarettes, cigarillos, cigars and other such inhalants altogether?

I see smoke on the horizon, Great Ones. And it’s the tobacco market as we know it set ablaze.

In other words, if any publicly traded tobacco companies are part of your portfolio … it may be time to smoke ‘em out. Like Juul, I don’t think they’ll last long.

Put THIS In Your Portfolio And Smoke It!

Clint Lee is revealing how he’s managed to score a 90% win rate on the positions he’s recommended in 2022 — all while the rest of the market’s fallen by 20%.

It’s all thanks to a major breakthrough that allows Clint to track quant trading activity most other investors don’t see. This breakthrough has allowed Clint to uncover top gains like:

Now Clint’s about to do it again with his latest “Cash Tsunami Trade” … and if you act quickly, you can follow along with him. 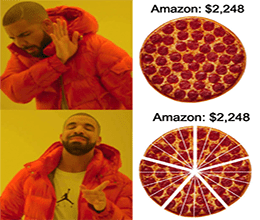 Amazon might’ve minced its stock into 20 smaller share slices, but how’s this serving of its half-baked shareholder value really helping anyone? 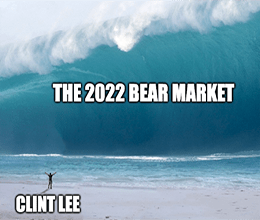 Clint Lee says this year’s bear market won’t be hibernating anytime soon, but that there are still ways to profit from this tidal wave of volatility. 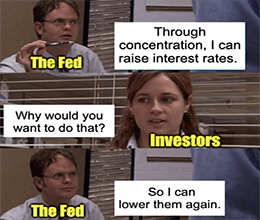 When Will The Fed’s Fury Fade?

Ted Bauman has four key signals to confirm the end of interest rate hikes — and when the market really hits bottom. 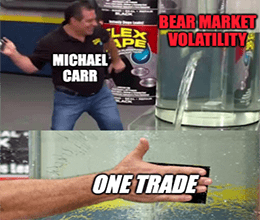 1 Is The Easiest Number

One Trade is the easiest system that you’ll ever use… No, really. It’s one trade, on one ticker symbol — just once a week! 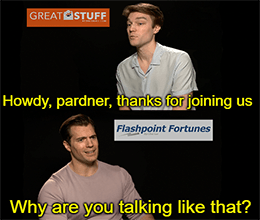 Clint Lee is joining the 𝘎𝘳𝘦𝘢𝘵 𝘚𝘵𝘶𝘧𝘧 gang for another fireside chat — and this time, he’s bringing the “Quant Club” cheddar.

Write to us whenever the market muse calls to you! [email protected] is where you can reach us best.

Until next time, stay Great!