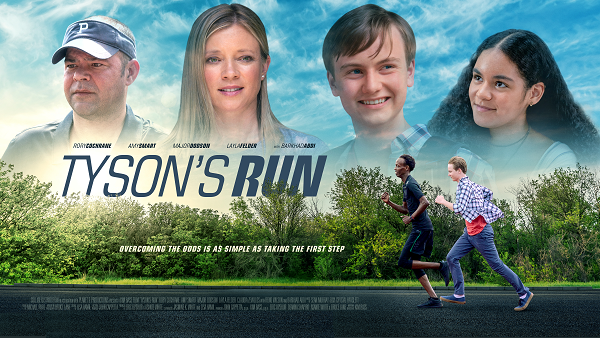 TYSON’S RUN is a heart-warming film that mixes humor and drama to tell an inspiring story of faith, persistence, and overcoming challenges.

Get it now on DVD or digital!

Tyson Hollerman (Major Dodson) is a 15-year-old teen on the autism spectrum. He’s mentally gifted, can rattle off numerous facts, and loves to stare at his solar system mobile. Homeschooled by his devoted mother Eleanor (Amy Smart), Tyson isn’t very close to his father Bobby (Rory Cochrane), a high school football coach. Longing to be accepted by his dad, Tyson decides that he wants to start attending the school where he works, to be closer to him under the guise of learning algebra.

Reluctantly, Tyson’s parents agree to let him go. On his first day at Pope High School, Tyson quickly learns who the bullies are – and who his friends are. While helping his father out on the football field after school, Tyson sees champion marathon runner Aklilu (Barkhad Abdi) running around the track. Never letting his autism hold him back, Tyson becomes determined to not only run his first marathon, but to win it.

TYSON’S RUN is a heartfelt, feel-good movie that brings awareness to some of the struggles that people on the autistic spectrum go through in everyday life. With the help of an understanding mentor, Tyson learns that with confidence in himself and the courage to take the first step, he can strive to reach his goal. Hopefully this movie will inspire other autistic teens to pursue their dreams, as well as help others realize that they don’t need to be held back due to their condition.

How about you? Have you ever found yourself trying to get the approval of a parent, or felt the need to prove yourself to others? Are you smart but socially awkward, or know someone who is? Do your goals sometimes seem impossible? There is something in this movie that we can all relate to.

If you like faith-based films or sports dramas, or if you’re a fan of OVERCOMER, you will want to cheer for Tyson and TYSON’S RUN!

While this is a faith-based film, there are only brief nods toward Christianity such as the characters saying grace at mealtime and going to church. Still, the movie contains strong Christian themes of unconditional love, forgiveness, and self-sacrifice, as well as an emphasis on the importance of fatherhood and parenting, and even a subtle pro-life message. The film ends with an on-screen Bible verse (1 Corinthians 9:24).

TYSON’S RUN is rated PG by the MPAA for some thematic elements and language. There is one use of “G–dammit” exclaimed by an adult during an intense moment of peril. A couple of bullies make fun of Tyson by calling him “retard” or “retarded,” and one of them makes a rude joke about male and female genitalia in science class. There is a scene after the ending credits that shows Tyson getting his revenge on the main bully.

At one point in the movie, a doctor recommends bed rest for a woman. And yet for the rest of the movie she’s running all around town doing stuff! No harm comes from it but that didn’t really make sense.

Enter for a chance to win one digital copy of TYSON’S RUN! Simply click on the COMMENT button below or click on this link to leave a comment saying what interests you most about this movie! (Note: The giveaway is limited to US winners only.) We will pick one random winner to be notified on July 1st.

Disclosure: Many thanks to Collide Distribution for providing a digital copy of TYSON’S RUN for this review and giveaway!