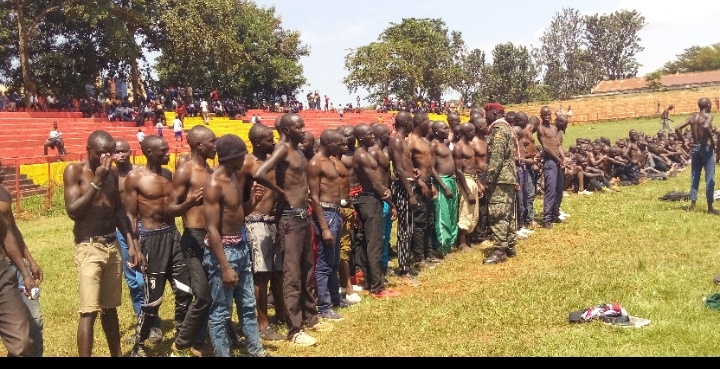 Henry Temu, 28, a fisherman was among the thousands from Jinja city,Jinja and Kayunga Districts who turned up to be recruited to join the Local Defence Unit and Uganda People’s Defence Forces (UPDF) at Kakindu Stadium in Jinja City on Monday.

Mr Temu was very excited upon being informed that he is medically,mentally and physically healthy and said he had long ago wanted to join the army but he was limited to communication given the remoteness of Buvuma district where he conducts his business.

“I have been a fisherman although I went to school but did not go far. This time around when I heard about the recruitment I prepared myself and God was on my side. I was medically checked and I was medically and physically healthy,”aid Mr Temu.

Mr Temu said he wishes to join the force to contribute to the national security of the people in the country and love seeing the smartness of the men and women in the uniform.

He explained that his experience during the recruitment is that when you have the authentic documents that are  required, automatically you go through without any bribe.

However at Kakindu thousands were turned away from joining Local Defence Unit(LDU) and Uganda Peoples Defence Forces (UPDF) on medical grounds,forged academic documents during the ongoing countrywide recruitment exercise into the force.

The UPDF First Division Spokesperson Maj Charles Kabona said there is an overwhelming turn up of 4000 applicants, unfortunately only 200 are going to be taken up after tight screening.

Maj Kabona said the high turn up is attributed to the discipline and professional ethics that is exhibited by the men and women in the uniform that is attracting the youths into joining the force.

“Unfortunately we are not going to take up every applicant who has come to be recruited into the force.We are going to take the cream especially those who graduated in the areas of sciences like nursing ,doctors ,civil engineering and mechanics for the recruitment,”said Maj Kabona.

Asked about the accusations of bribery and ferrying of applicants from a region to be recruited in another limiting off number of the real beneficiaries in that particular district,in reply the officer said they have not registered that kind of case or complaint.

“We have not registered a case of people being ferried to come here to join the force .We are relying on our local leadership right from the village chairpersons who recommend these youths.We believe the recommendations are authentic with the verification team of the security team,”said Maj Kabona.

He added that 1000 professional drivers are going to be recruited between 30th June and 1st July in Gadaffi Barracks,100 medical personnel recruitment is on July 1st in Kololo airstrip.

Do you have a story in your community or an opinion to share with us: Email us at [email protected]